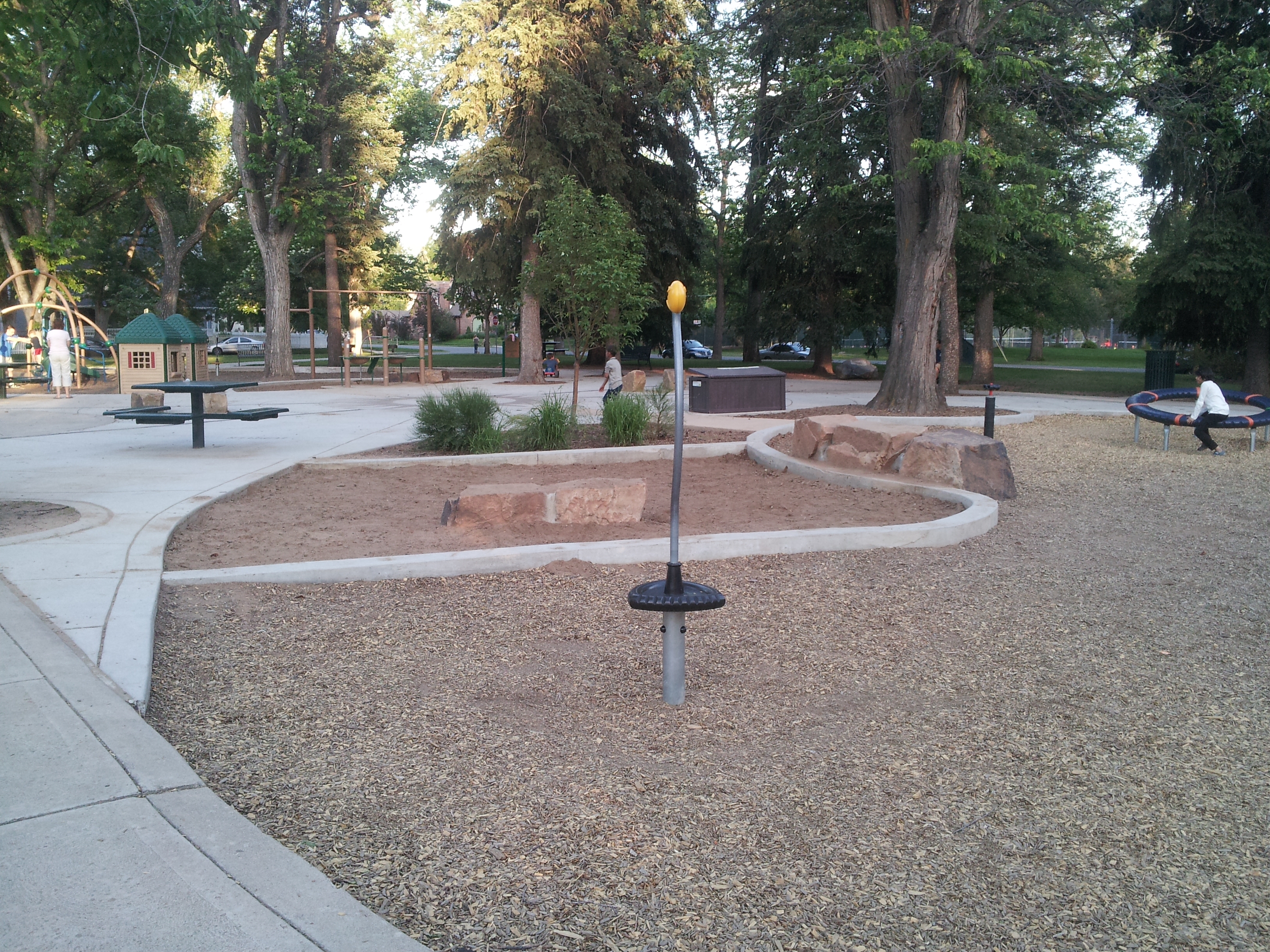 University Park is proud to be home to several parks and open spaces within our one square mile boundary. While the City and County of Denver manages them, our neighborhood has a long commitment of involvement and care for our green space.

Park guests are expected to be courteous toward other park guests and neighbors, by
Picking up all trash
Keeping noise within reasonable limits
Leaving the park in good condition
Keeping all pets on leash and picking up pet waste

This is only a partial list of park rules. For a comprehensive set of rules, click here.

Observatory Park – located between Evans and Iliff Avenues and Fillmore and Milwaukee Streets.
This park was dedicated and designated on Arbor Day in 1886 as the original park for the University Park neighborhood.  The two observatories in it are owned by the University of Denver, but the park itself is owned by the City and County of Denver.  Covering two full city blocks, Observatory Park is the site of many community events sponsored by UPCC.

McWilliams Park – located on the north side of Yale Avenue between Clayton and Steele Streets.
Named for former University Park resident Robert Hugh McWilliams, Jr. (1916 – 2013), who also served as both a Denver District Court judge and Colorado Supreme Court Chief Justice, the park was dedicated and designated in 1967.  Harvard Gulch and the Harvard Gulch Trail run through the length of the Park. The trail continues eastward to South Colorado Boulevard.  Although it often is referred to as “Dinosaur Park,” the sculpture in the park was designed by a Denver artist who called it a “dragon.”

Historic Buchtel Boulevard Trail at Prairie Park – located on the north side of Buchtel Boulevard between University Boulevard and South Monroe Street.
This park is the newest addition to our neighborhood green space, and the culmination of a 38-year effort led by Diana Helper, Chair of the Open Space & Parks Committee. The property was owned by railroads and in recent years by RTD, but was given to the City of Denver by RTD in exchange for other land. From there, UPCC and Denver Parks and Recreation have worked together to make this dream come true, with a dedication of the site in 2004. We hope to achieve the official park designation from City Council during 2014.

Buchtel Centennial Park – located on the south side of Buchtel Blvd. Pkwy. between S. Josephine St. and S. Columbine St.
The park was dedicated and designated in conjunction with the University Park centennial in 1986. The genesis of the park was from a neighborhood plan created by long-time UPark resident Diana Helper as part the Colorado Centennial in 1976. At the west end of the park there is a large rock with the inscription, “We seek to understand the truth about everything under the stars and above the stars.”  This quote is from Henry A. Buchtel (1842 – 1935), who was a Colorado Governor, the Senior Pastor of Trinity Methodist Church, and a Chancellor of DU best known for returning the university to fiscal health after it had experienced difficult times.  The park was enlarged in 2011 by the closure of East Jewell Avenue which formerly ran through the south side.

Harvard Gulch East Park – located along Harvard Gulch on the west side of South Jackson Street.
This small park includes some picnic tables and benches, along with a small plaque in memory of Mary McGuire, a young resident of the immediate neighborhood whose parents set the stone in her memory long ago.

Harvard Gulch Trail – located between South University Boulevard (just south of East Vassar) and South Colorado Boulevards (ending just north of Schlessman YMCA).
The trail follows the Harvard Gulch and cuts through the University Park neighborhood from its west to east borders and is a lovely path for walking, jogging or biking.